When The Plan Comes Together

It is indeed a beautiful thing.
First Chuckie "Smirkin' Chimp" Schumer declares war on the Reps to the point that he demands all his flying monkeys in the Senate filibuster probably the best qualified nominee since I don't know when, which rather forces the R's hand: 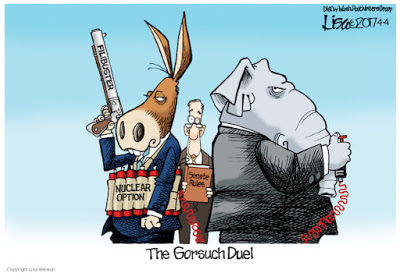 Then the WSJ online comes up with this bit of doggeral:


Fili Busta Rhymes
There once was a nominee, Gorsuch,
Whose judicial philosophy bore such
Resemblance to Nino’s,
The Dems (not the RINOs)
Compelled us to nuke. There’ll be more such.
-- Myles Pollin

Reportedly the button gets pushed today, and Gorsuch gets confirmed tomorrow. Thanks Chuck for stiffening the GOP spines to the point that they'd actually do this.
Posted by Billll at 10:13 AM