Several things came together today, so here they are in one handy post:
The Libertarians had a debate and the topic of restricting gun rights for the mentally "differently abled" came up. The former governor suggested that this issue might need to be looked into, which got him booed by the crowd. Here's my observation:

As a private shrink, you wouldn't declare ANYONE to be unstable as there are lots of legal implications beyond gun ownership that come into play here. Remember that above a certain income level one is NOT crazy any more, just eccentric, and people in that tax bracket have lawyers.

The shrink's alternative course would be to declare everybody to be ineligible since you can count on being sued if even one of your positive recommendations turns out to be wrong.

By the time you're far enough gone to be properly declared ineligible to own firearms, you're probably already in some sort of "closely supervised" environment. Adam Lanza was at the point where his mother was looking in to an institution for him when he flipped out and killed all those people.

Do we want crazy people arming themselves against imaginary enemies? No! But who decides? The "safe" way would be to assign the judgement to a civil servant with qualified immunity so when your vengeful ex sends him a note saying that you're nuts, he can issue the paper secure in the knowledge that he's immune from complaint. Besides, if you feel this judgement has been issued in error, feel free to retain a lawyer and file a request for annulment of the adjudication just as soon as we let you out of the state booby hatch where you've been sent for observation.

Keeping guns out of the hands of crazy people is a swell idea, but let's work it backwards. What is the most common feature of people who commit violent acts with a gun? Take both routine criminal and psychotic mass shootings as well. Lookey here! 99% of the perps are registered Democrats or voted that way in the last election. Bingo! A nearly completely foolproof method for determining insanity, or at least a disqualifier from owning or possessing a firearm. Now all you have to do is get them to surrender their arms and promise not to acquire any new ones.

Let it not be said that I'm just picking on the Donks here. Some offsetting prohibition should also be applied to the Republicans, say denying them the right to an abortion.


As to limiting the types of arms one might posses: 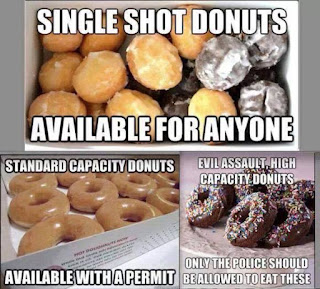 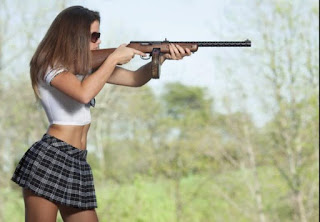 Pics found at Powerlineblog where there are a whole bunch more worthy of a gander.