I've never seen this before and of course when I first saw it, I didn't have a camera with me. Seems when you get a heavy wet snow followed by very slow melting, this stuff forms underneath.

This patch was in a school yard and from a distance it looked like a solid layer of frost about 5 ft by 15 ft. The picture above was taken a week later and not much remained. Earlier there were very thin fibers with pepper grain sized bulbs on top, presumably spore packets. I'm told it kills the grass. In my yard it seems to be attacking the crabgrass primarily so I'll say it's not all bad. 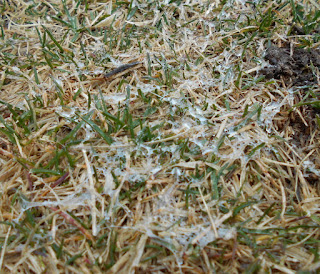 The white part started off slimy but dried out and became cobwebby later. Odd stuff.

Do you know just what this is & what causes it?

AFAIK it's just one of those itinerant lawn pests operating under the umbrella banner of "Occupy Billll's Lawn" along with Japanese beetles and crabgrass. Could be worse. I imagine the Australian version is toxic to the touch and eats small animals and unwary groundskeepers.

OK, thanks. I just wondered if it was something that came down with the snow.