Over at Zero Hedge, always a good source of interesting tidbits, I find an article on the increasing number of major power outages in the U.S. Here's a graph: 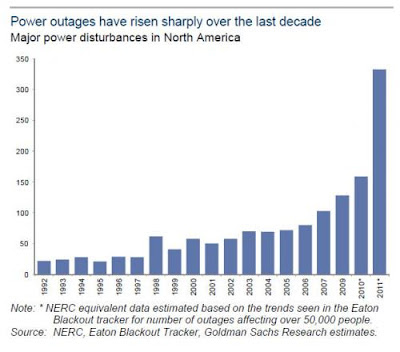 Evidence, if you will, that the Obama administrations war on coal is working. A shut down power plant here or there doesn't show up until demand for power outstrips supply and the old plant isn't there to bridge the gap.

A rational marketplace would shut down less efficient plants and replace them with the most efficient equipment out there, both economically and technically. Windmills and solar panels, alas, don't qualify here so while your utility is investing in both of these, the old coal plant they're shutting down probably produced more power for less money than all the windmills they ever bought.

In a recession, demand drops. If the infrastructure is being systematically pillaged, the supply can drop faster than the demand and the result is first sporadic outages, then rolling blackouts.

Also it does well to remember that the secretive cabal of insanely rich folks isn't getting richer when their enslaved workers are sitting around in a darkened factory waiting for the lights to come back on.
Posted by Billll at 8:15 PM