The Future Of Transportation - Urban

Her you go folks, the Westward Interceptor III, a sporty single-seater just made for today's crowded urban environment. 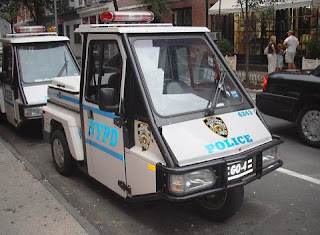 Shown here in NYPD meter-maid regalia and Popsicle truck body form, this little baby is actually slightly larger than a Smart For Two, but can be had in pickup or van form, either of which will out-carry the Smart. It has a 4-cyl F.I. engine of 61 hp with a 4-speed automatic, so performance should be adequate, and options include a tip-over warning to let the driver know they're going around a corner too fast.

Also included is an electronic speed governor that limits the beast to 40 mph, which looks to be in convenient plug-in form, suggesting that it's un-plugable as well, Un-plugged, it will reportedly reach 70 mph, but watch those curves.

Since this is considered a motorcycle in most states, insurance will be significantly cheaper than a car to insure, and parking into the curb is legal, although you may be required to wear a helmet while driving. It is built around a full roll cage and features sliding or hinged doors, so if you should over cook a corner, you just hop out, right it, and proceed on your way with damage limited to perhaps one of the mirrors.

Get one now and help your neighborhood begin to resemble a New Delhi traffic jam. Many of these should soon be on the used vehicle market as New York has decided to go with the more cost-efficient* Chevy Volt, which can spontaneously make a neighborhood look like an Iraqi traffic jam after an Al Quaida car bomb presentation.

America's answer to the Reliant Robin runs about $20K new and about $4K used, depending on condition.

*"Cost-efficient" apparently has a different definition than we're used to when used by Mayor Bloomberg.
Posted by Billll at 3:50 PM

Did you ever see the TopGear segment on the Reliant Robin?

Alas, I've missed it. I have seen and read enough about the things that I know that in England it's known as the "plastic pig". The factory denies that it rolls over easily, which no one believes, and a native I once met describes them as popular with the 14-16 crowd since they are considered motorcycles for which one can get a permit at 14.

OK I caught the segment. I believe Jeremy Clarkson rolled the Reliant about once per mile in a 14 mile trip. OTOH, who in their right mind would let Clarkson drive anything they expected to get back in one piece?

Its a hilarious segment.