I love it when we can go out to the range in early November and enjoy 78 degree temps, no wind (for a change) and hunt the wily wild bowling pin.

One of the shooters was 10 years old. His dad had fixed him up with a Beretta 9mm which demonstrated a predeliction to not cycle. It either needs a softer spring or livelier ammo, but the easiest fix, and probably the best one was to fit the kid out with daddy's .45. It was a bit of a handful for a small kid, but you could see him getting better with each table. By this time next year, he'll have his own .45, and the rest of us will be toast, except for our resident Finn, who can clear a table of 5 pins in under 5 seconds.
After the match, we got out the pin tops and let the kids have a go at them with .22's. 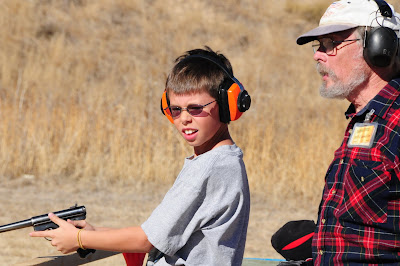 Here he is with the Ruger Mk 1, which is almost as old as the geezer behind him. He finds the pin tops to be great fun. Not surprising considering the big recoil drop from the .45. I suggested letting the kids shoot pin tops with .22's against the adults, but got overruled. Probably just as well as I believe he would have embarrassed several of us doing this.

The other youth was a cute little pixie, 9 years old, who helped me keep score and acted as my gun moll, refilling my speed loaders for me. She had shot a .22 rifle, but had never handled a pistol. The Mk 2 was a bit of a handful for her, but she gave it her best shot (!) and picked off her first pin top. 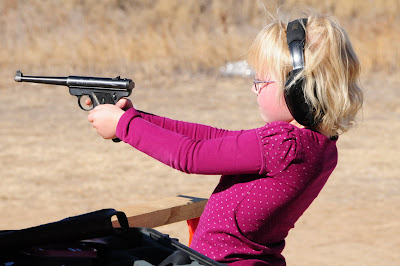 All together now: Awwww...
She'll grow into the grip size and gun weight, I'm sure.

BTW: Neither of the kids is that tall. In order to prevent ricochets from going over the berm, we set them up with a platform made from a couple of cinder blocks for them to shoot off of. It makes them about 9 inches taller.

Thanks to Don for the nice pictures.
Posted by Billll at 7:09 PM

I wrote a book on bowing pin shooting 20 years ago.