While washing the motorcycle the other day, I noticed that the left front frame downtube had cracked in two. Some history: when I bought the bike, is was definitely a fixer-upper, and had suffered a good deal of neglect. Eventually I got most of this fixed, and had a smooth-running engine, and a nasty vibration in the handlebars. One day I noticed some Bondo had flaked off the right front downtube, revealing that the repair job to the crack there had failed. The bike has four backbone tubes, and two down tubes holding the front forks to the rest of the bike, and inspection revealed that two of the backbone tubes had cracked completely through, and the other two were 3/4 gone. I straightened things out a bit, and welded them back together, insofar as I could reach the cracks. That was about a year ago. 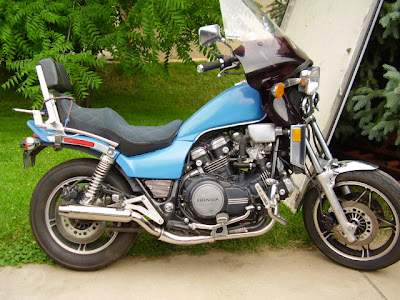 Honda V65 Magna
With this repair, I have now had to completely re-weld every single structural member holding the front to the rear on that bike. Face it, it may be time to consider finding a new frame. Or maybe a new bike. Or maybe you'll see a news story about some dude whose bike disintegrated while he was riding to work.

I rather like the performance, though.
Posted by Billll at 7:31 PM

This sounds like the possible start of a beautiful trike project. Graft something like the front-end of a Super 7 onto that thing and it's a tadpole.