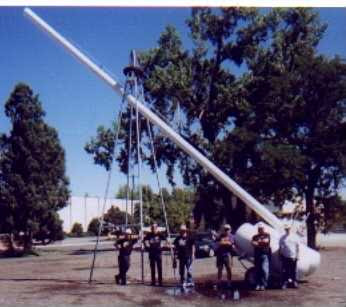 This thing had a barrel 40 ft long, of 10 inch PVC pipe, and about 90 cu ft of air tank, made from 2 45 cu ft propane tanks connected together. This in response to a local pumpkin launching challenge similar to the Punkin Chunkin in Delaware. How far can you throw an 8-10 lb pumpkin?
J.P. was a great success, and in testing at the gun club, made a toss of 3300 ft, which put us at about #5 nationally. Unfortunately, the local contest didn't anticipate us, and only had 1000 ft to their venue. There were some good stories attached to this machine involving golfers, waste ponds, and successes beyond our wildest dreams.

Alas, the thing was far too powerful for the local contests. What came of it was a fellow from a mountain fire district who thought the air cannon might be able to launch fire suppressant up to hard-to-reach fires, saving the cost of a helicopter or airplane to put them out. He donated a trailer for a platform, and with some industrious scrounging, Bomberos we born. 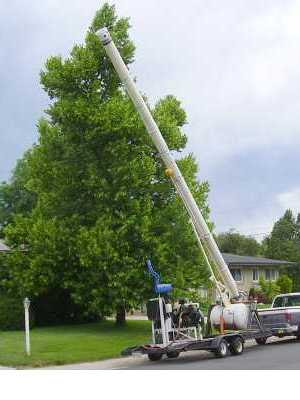 After much developmental work, the above configuration is what we wound up with. The fire suppressant idea died with its inventor, and for lack of funding to have the 3-gallon containers required built, but the cannon soldiered on, launching pumpkins and inspiring 2 or 3 other air cannon builders in the Denver area.
Among the original group, interest has flagged, so it's time to sell this off and move on to bigger and better things. I may have found a buyer at the gun show today. I'm going to miss this monster. At full pressure, a 12 lb bowling ball leaves the barrel at 200 mph, and travels about a half-mile, or rolls quite some distance along the prairie, bowling for gophers.

Oh well, onward and upward.
Posted by Billll at 5:44 PM

I knew this was coming, and it's as should be, but I can't help but make a little sniffle for our dear departed friends.

Now that that's out of the way, when do we start the spring-powered, cam-armed trebuchet? I've still got MY share of the garage door springs.

I've got some too, now that you mention it.
Got lumber?

I've got lumber, but I exchanged my garage door springs for more lumber.