It is for me, anyway, as my ballot has arrived and I get to spend the weekend muttering to myself while filling it out:

Another project? HELL NO!

You want to be re-elected? BITE ME!

Keep you on the bench? IN YOUR DREAMS!

Questions on the ballot are usually requests for a tax increase for some splendid and worthwhile boondoggle, like the worlds largest toy train set, a new athletic venue, or modern seaport facilities for the City of Denver. Generically, if you don't want to read the details of what the question would actually do, it's safest to vote NO on all of them.

This year is different. One question, 63, asks if we would like to opt out of Obamacare. Finally! a question I can support.

3 others are attempts to hamstring the government and roll back spending levels dramatically. The opponents scream: "But it will cripple the government, and stop all the splendid and worthwhile (see above) things they do."

Hold it right there. You had me at "cripple the government".

I'm not sure these were written as well as they could have been, and the governments and unions are spending lots of money to see them defeated, but the sentiment is good, so they get my vote.

Meantime here's my favorite 'toon for the upcoming elections: 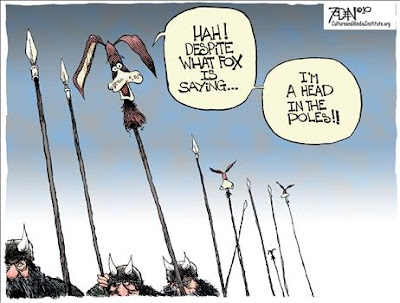 Time to bring out your inner barbarian and help make the results make the Battle of Little Big Horn look like a stunning military victory. 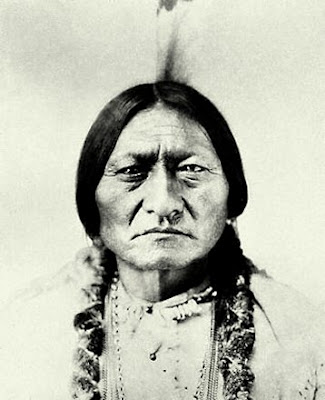 I am not sure that if I were Sitting Bull, I would care much that the uniformed marauders, Custer and company, had been militarily trounced so badly.

I think I would have been relieved to have ended the blue scourge, for a time. And I would mourn the slaughtered women, children, and other villagers Custer left in his wake.

I might be a bit fired up about the next encounter, a bit less likely to take what the lying folk that sent that marauding band of uniformed "Let's surprise them so we can kill all them women and children!" defenders of . . um, what was that they were defending by murdering sleeping villages, women, children, and burning the stored food in the middle of winter?

I mean, whoever thought up these tactics must have been so surprised that someone intelligent and sane might take thought, consider, and still take umbrage.

Talk about missing the lesson about "If at first you don't succeed - for goodness' sake, try something that might work."

I hope they don't use those old Chicago rules on this election, "Vote early, vote often." Wait - Chicago sold Obama his Senate seat, then put him in the White House. Chicago did. ACORN is still out their, rooting for the . . um, I guess, whichever way the money flows. SEIU is still shilling at gatherings, railing against all those evil, conniving, lawless and insane non-union doubters - wait! That's me! I don't think I feel . . um, evil, at least, I don't intend to be, though I do oppose most all that the unions do to cripple businesses, interfere with people respecting their boss and employer, etc. Oh, and unions are the definition of taking money out of the local economy, too.

I have a gritty secret. We have a local state representative, a two-term incumbent Democrat. The Republican opponent's message isn't more than "I am not him." He won't even state he is Republican. So I plan to vote for that one Democrat. But that is the only one I plan to vote for. I promise! I mean, the guy running for re-election has done a pretty good job, hasn't done anything that bothers me much, and does a fair job or representing the district. I cannot ask much more of a candidate. And I really think the district and I will be better sending him back for another tour.