The Economics of Buying Guns

Joe Huffman has a chart up showing NICS checks by month for the last 27 months. It's interesting to see the cyclical nature of gun purchases. It seems you buy them for Christmas, and just before tax day, anti-government bitter clingers that you are.

He notes that the rush to buy guns that took place when O'Bama got elected is still going on, only very slightly abated.

Here's another chart that I put together from the available data provided by the FBI: 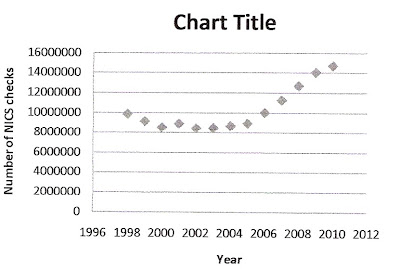 Note that the big rush on guns began in 2006 when the Dems took over congress, not in 2008 when they took over everything.

Disclaimers: A NICS check does not automatically indicate a gun sale. Also some states, mine for example, don't use NICS, preferring to keep the monies at home rather than giving it to Washington. A laudable attitude, as long as it's not abused. Not that the government would abuse its power by deciding to de-frag the disk drives or something on the weekend of a big gun show in Colorado Springs, effectively shutting down the gun show.
Posted by Billll at 9:47 AM