NICS Checks - Another Record As Expected

OK the Feb numbers are in and to no surprise, we set another monthly record. Or maybe we just increased at pretty much the expected rate. With the Bloomberg states, led by VA, OR, and WA passing gun control laws as fast as they can be rammed through, and the primary sponsor of said laws spending godzillions of dollars to get himself elected, there may be some panic buying going on here. 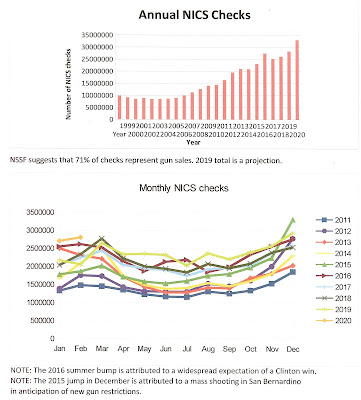 2020 is starting off slightly ahead of the infamous 2016 which was led by the widespread expectation of a Clinton presidency. It's way too early to be calling this but at the rate we're going it looks like we might see 30M total checks this year.
Posted by Billll at 3:53 PM