The March For our Lives needs to thank the folks who came out, especially the high school kids who had not figured out that they were being used. At the school where I'm mentoring the robotics club, I noticed that there were at least 3 flyers inviting the students to pop on over for the march downtown. The march being over, and the flyers having not yet been removed, I put this one together and taped it over the top of one of the invitations. 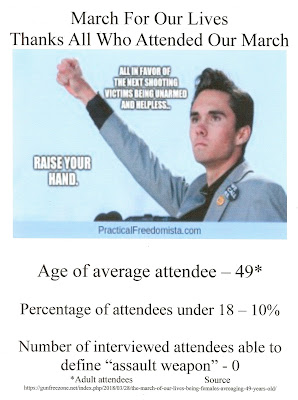 Some time early this coming week, I hope to hear from my friend who teaches there about the faculty member who was blowing a cork in the staff meeting over the presence of such right wing propaganda.

We've all seen the car in the food store parking lot with the rear side nearly completely covered with leftie bumper stickers. Well there's a classroom in the school whose door closely matches that image. I expect that this will be the location of the exploded head.
Posted by Billll at 7:01 PM