The (Far) Future Of Transportation

If you want, the Elio P5 will be making an appearance at Bandemere Speedway on 4 July. If you're dying to see the first production prototype, now's your chance. 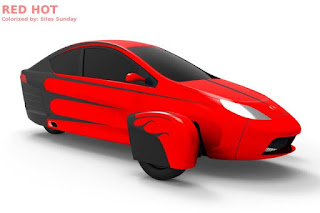 Shown here in custom paint, which the actual vehicle will not have, the P5 features the production engine and some styling tweaks. Roll out is still scheduled for mid 2016.

I would think that if the vehicle now has all the production drivetrain in it that the show tour would feature the car being actually driven from town to town instead of riding in a truck. It should be time to begin exposing the Elio people to the real life quirks the motoring public will be seeing.

Looks like one of those three wheeled "motorcycles" one sees - with a body attached.

Paul Elio is running his company like a research division of Mercedes Benz which unfortunately it isn't.