The annual Kinetic Sculpture contest, now held in Longmont went off yesterday. A pale shadow of its former self, but still entertaining and now including a second kinetic float contest for the kids to build something on the spot.

The start was its usual well-oiled self with the national anthem being inaudible from my position where I'm supposed to fire the start gun and sculptures hitting the water a good 5 minutes in advance of the actual start time. We saw the floats moving away, couldn't get any confirmation of what was happening, and so fired the start gun 2 minutes early to send off the retreating machines. 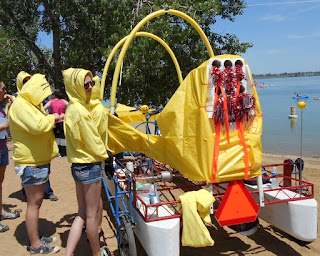 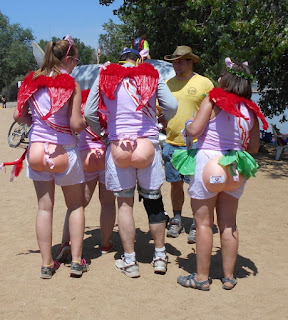 Something about Cupid and bacon 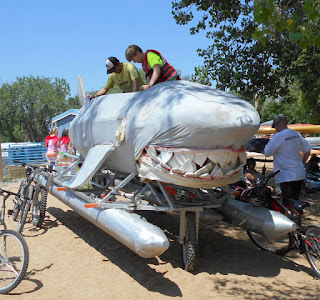 And the shark among others were entered. We were set up at Rags Folly which involves negotiating a large ditch/creek bed 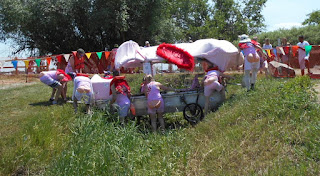 It helps if you can pick up your sculpture and carry it in places like this. After the race, there were various events culminating in a bonfire at 8:30 which I couldn't stay for. Here's the bonfire float: 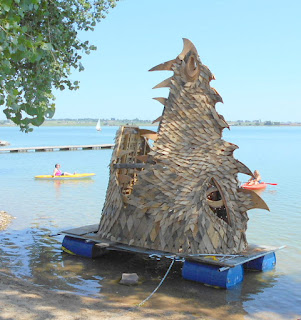 a work of art in its own right.

Regardless of your position, the race officially ended at 3 PM at which point I fire the Finish Gun 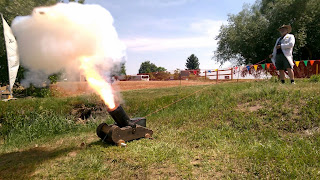 and wherever you are on the course at that point you are DNF but awarded position. It looked to me like only 3 vehicles got all the way around the course in the allotted 2 hours. At this event the lab coat was de regieur.

Thanks again to Karl who helped with the gun and took the above picture. Best I've ever gotten on the cannon firing. For you gun nuts, that's 400gr of fffg black powder under a tennis ball. The ball did not seem to have survived the experience and splashed down about 100 yards out, exact condition unknown but probably badly shredded.