The mini-maker faire came off well at the Natural History museum where I saw a bunch of interesting stuff and met several interesting people. Here's a couple of shots of our table where we had an animatronic head and an animated crawling hand 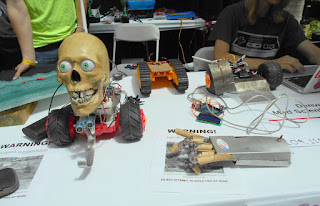 along with some fighting robots. The ones in the background are 2-lb class fighters. The skull will nod his head, roll his eyes, flap his jaw, and engage you in conversation of a sort. The hand will pull itself across the table with its 3 middle fingers and looks better when dressed in a latex glove and a shirt sleeve.

The warning flyers were photos of some of the stuff the newly appointed safety nanny wouldn't let me bring.

This is a trophy 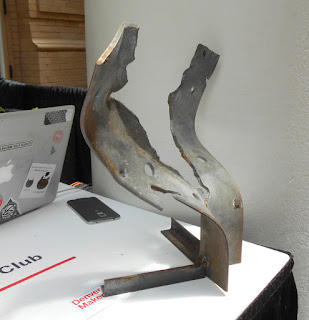 given to the member who does the best job of blowing up his own garage. It used to be a stick of 2x2x1/4" angle until we taped a 2 million candle power photo flash unit to it and shot it with a rifle. It made a fairly bright flash even in broad daylight. I cut off the undamaged part of the angle and added the 2 legs on the bottom.

In the first decade of the twentieth century, not one, but two PVC air cannons were accidentally blown up by a group of mad scientists in Denver. This had not been their intention. With luck, and the statistics of a sparsly populated feild, no one was injured. The fellow in the following link was not so lucky. http://nerfhaven.com/forums/index.php?showtopic=22520 When his gun blew up, the pvc cut through his shoe and into his foot. Still lucky, I suppose, that the shards cut down, into his foot, rather than up into his crotch. Back in th '80s, OSHA prohibited PVC for compressed air, unless encased in a shatterproof housing. This was after plastic airlines in a paper plant exploded, sending shards deep into rolls of paper.
Bills aforementioned "safety nazi" had offered both time and materials to replace the 8 year old PVC on the pedal gun with steel components. PVC becomes more brittle with long exposure to sunlight and compressor oil. Even with free labor and materials, Bill did not want to upgrade the gun_.
The luck shared by those in attendance of Denver's 2 catastrophic PVC failures might not have continued in a crowded room which included children. And now you know "the rest of the story."
Sincerely, the Newly Appointed Safety Nazi

PS.
The offer still stands, If you want help and materials to upgrade for the next Makerfaire. I thought the pedalgun was a cool project when you and I shot video to send to Popular Mechanics. I still do. It's merely a bit of updating required.
S.N.

While I won't argue that PVC, under certain circumstances can catastrophically fail, I will point out that historically it usually fails at around 100 psi and after continuous duty at that pressure. The Pedal gun normally never runs above 65 psi and for the Maker Faire would have been limited to about 20 psi with the lowest rated pipe rated at 240 psi.

I saw your methodology when you built a simulator, pumped it up to about 80 psi, and launched a projectile weighing about 10 times what I'm using to demonstrate the guns ability to penetrate wallboard. This delivered about 80 times the energy of the toy I wanted to demonstrate and puts your simulation right up there with the ones demonstrating fire hazard when certain GM trucks are hit with a side impact while an Estes rocket engine is burning next to the gas tank. Remember those?

FWIW Part of the attraction of the gun is its scalability. The gun will throw a D-cell battery through a cinder block or a properly prepared empty 12 ga shotgun hull through a piece of 1/2” plywood, which is why I don't allow this sort of thing at a Maker Faire. There it's Nerf or nothing.

The Mad Scientists in the past have seen 2 PVC barrel failures, both of which resulted from jamming of a misfitting projectile, NOT from a pressure overload. The barrels in question were rated at 55 psi working pressure,

The gun has been posted in Instructables with complete instructions. If you want one with Chobham armor and a 2.00 cal barrel rated +P, make it yourself. I already told you what I was willing to do and it seems it wasn't sufficient.

Keep up the good work, you have a bright future ahead of you in the fields of climate science or economics.

My facsimile of your projectile weighs 2.5 oz. How much does yours weigh?

If I got the mass wrong, it was an honest mistake. One that I'll gladly admit to. But I doubt I was off by 10x. If I was, then your projectiles weigh about the same as a $0.25 coin.

I was estimating the weight differential based on admittedly unscientific comparisons of arm-waving size estimates. One of my nerf darts pulled at random weighs .79 oz, about 1/3 of yours. I'm not hearing any disclaimers about how much pressure you used though.

Note that i did offer to add a regulator.

Editing the post to remove the Nazi references. While comparison to their totalitarian inclinations was appropriate, the reference is generally overused. Replacing it with nanny. No need to change your name.