It's that time of year again when all the greenie institutions get out and flog their wonderfulness. Last week the bus people were at my work taking pictures of anyone they could round up to possibly use on a billboard thanking my employer for giving everyone a bus pass.

I had not yet gotten my coffee and they didn't notice my cup had a Jaguar logo on it so I might wind up on a billboard.

Along with that is national Bike To Work day. Again here's the flyer, copied from the very first one published. Note that the word bicycle does not appear anywhere on the poster. 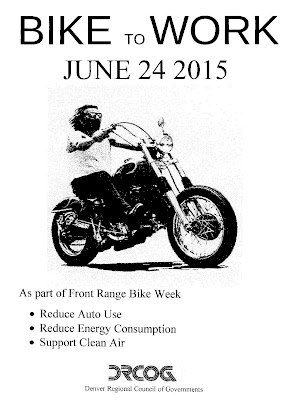 Only the date has been changed in the wording. Oh yes, and the picture. It originally featured a yuppie-looking fellow madly pedaling a 10-speed. I figured a bike is a bike and besides this is more like the way I roll. Just instead of an old Harley flathead, I have an old Honda Sabre.
Posted by Billll at 6:44 PM