What a poll tells you is rooted in the methodology. As I noted a few posts back, if you use the right methodology you can get a Romney victory  in the 64-36 range. Were my assumptions warranted? Maybe. They represent my opinion and it's as good as anyone elses, so there.

Here is an article showing the basis for some of the results we've been seeing, and here is the graph: 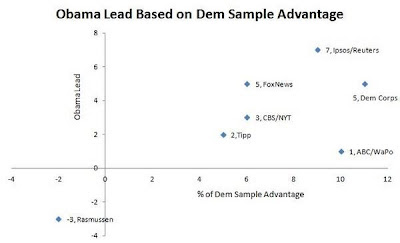 Note that even Fox over samples Dems in their polls, giving the Dems a 5-point advantage over the Reps. This may have been true in 2008, but I seem to vaguely remember that there was another more recent election since in which an enraged and motivated right handed the left their heads fairly convincingly.

Note Rassmussin, the lonely outlier, giving the R's a 2 point advantage. This would account for the 2010 election, the continued enthusiasm on the right, and a distinct lack of it on the left.

I'm sticking with my original call: Romney by 5, except in Illinois where with 110% voter turnout, Obama ekes out a razor-thin win.
Posted by Billll at 9:45 AM

A choice between fascism and communism.