In time of the plague, people confined to quarters become quite creative. In Atlanta someone has been making plaques and gluing them to walls: 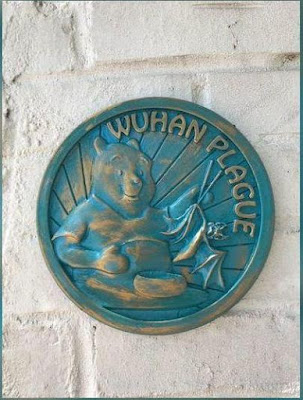 This is genuine art of the collectible sort. I first saw this in an article in the Atlanta paper where the author mentioned that the artist was being denounced as a racist for producing it. Apparently unaware that Winnie The Pooh is a very common stand-in for Emperor Xi Jin Ping to the point that Winnie has been banned in China in any form, and using the image will get you a visit from the police. I wrote her and asked to be informed if the artist is ever identified as I would like to purchase one of the medallions and maybe a t-shirt.

On a lighter note there's this: 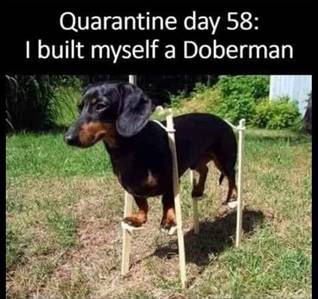 Full marks for creativity here although the doggie's feet don't seem to be particularly well attached to the legs.

My own efforts at making a Plague Doctors mask are having limited success as the tip of the beak, being the apex of some 5 seams, wants to assume a spiral shape all out of keeping with the pointed beak of a crow. It's something to work on while it's raining.
Posted by Billll at 8:39 AM