The panic with which some people are taking the Kung Flu is creating both great hardship and at times great amusement. Here's some amusement.
Made from stuff I had lying around, starting with a space helmet made from an old Coors Party Ball with an air hose attached to the pump attachment. Anybody remember the Party Ball? I bought this one solely for the ball  itself. Took forever to drink about 2/3 of the beer, even with help from my friends. Eventually the last of the beer went flat and got tossed. The air hose was a necessity. Inside that helmet, the air gets stuffy fairly quickly. 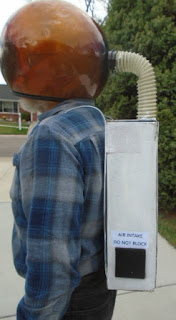 The small black square is a foam air filter from a small gas motor. Never used. At the bottom of the hose, there's a muffin fan from a computer to drive the air into the helmet 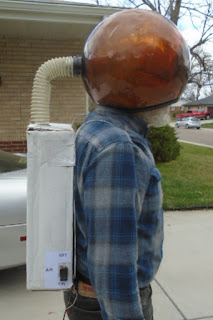 The switch is to turn the fan on and off. I'm using 2 7.2V battery packs from RC toys to power the fan. Not very powerful, but good enough to keep the air in the helmet fresh. 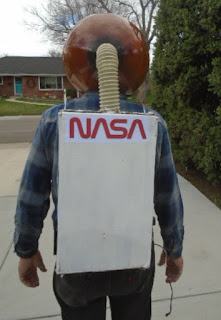 Wouldn't be complete without the NASA worm on it. In this case that would stand for National Association of Squash Artillery. Yes, we've built pumpkin launching cannons as well. 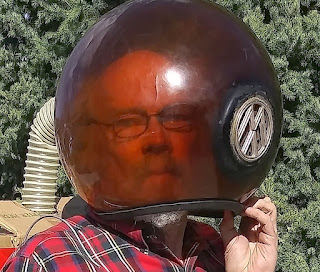 Behind that imposing Imperial logo, are some holes to allow speaking in a threatening, echo-y tone.

A rig like this is becoming de rigeur at Wall Mart these days.

Is it for real? Well the helmet will keep my sneezes off of you, and the filter and long convoluted path will keep your cooties off of me so I guess it works.

One other thing: Don't wear hearing aids with this rig. The helmet induces really wretched feedback.
Posted by Billll at 6:51 PM

elmedlifesciences said...
This comment has been removed by a blog administrator.
April 14, 2020 at 3:51 AM