I have nothing in particular against the stuff, indeed my carbine shoots its smallest groups using Blazer aluminum cased 180 grain ammo. The issue here is that when using this stuff in a carbine, the pressures are higher. As an example I recorded 1400 fps from the above mentioned Blazer, a boost of 250-300 fps over what I'd see from my pistol.

The extra  velocity means extra strain on the cases and for 2 of the 15 I shot last weekend, it was a bit too much. 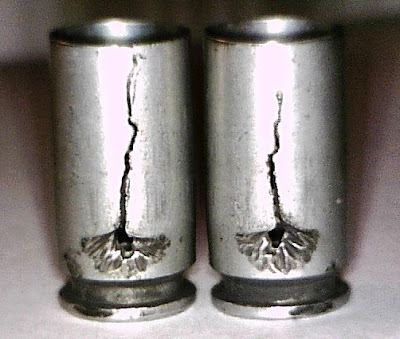 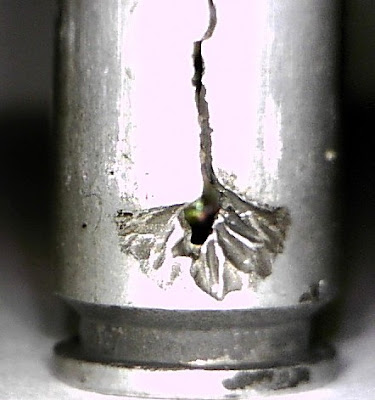 When this happened I noticed a bright flash from the ejector port and picked up a black powder stain on my index finger. I was pulling the trigger with my middle finger as I'm missing a bit of my trigger finger. Interesting pattern, no?

I was recording all my muzzle velocities but didn't think to note which shots were the ones on the blown out cases. Checking the numbers however I see that all the velocities were very consistent around 1403 fps except for two at 1382 and 1375. So not much loss but noticeable if you're looking.
Posted by Billll at 7:21 PM

this creates a problem with gas erosion in the chamber - and possible problems with gas going where it isn't supposed to!

Good visual of gas cutting for those of us who never see the effects on cast bullets.

Peak pressures remain more or less the same regardless of the barrel length. Your carbine sees a higher velocity because it has a longer barrel. Longer barrels get more work from the same load.

Finally, aluminum is not nearly as ductile as brass AND aluminum gets harder simply by sitting there. You’re cases were either too hard to begin with or they’ve been sitting around for an extended period. Aluminum cased ammo is ok for immediate use but don't expect it last in storage.

I had to look the aging process up, but yes, for certain alloys under certain circumstances, the hardening process is real. To my mind though the hardening would explain the cracking but not the burn-through. That the burn happened in the same place suggests that this is the first part of the case that's exposed in the ejection process, and that the bullet may not have left the barrel as the bolt is moving back.

I have no way of knowing what alloy Blazer uses for their cases, nor how long the ammo may have set of the shelf before being shipped to me about a year ago.

Jerry is correct about the pressure, but we should note that there is more area under the pressure curve in a carbine, due to more time in the barrel.