These little pests are rapidly becoming a big deal around here, appearing in large numbers in some places and not at all in others. Along with this there is a thriving cottage industry in ways to get rid of them without resorting to nuclear weapons, which only help until the next generation of grubs emerges.

Larkspur greens puree'd into a "tea" kills the bugs. Can be made just like classic sun tea or in a blender but it is not recommended using the blender for foods after.

As a friend of mine commented, avoiding alkaloid poisoning is pretty high on my list. I think I'd try the pepper and garlic spray first. Or maybe the mint, pepper, and onion spray. Recipes for home made beetle toxins can be found here. I bet some of those home made toxins make the dead bugs mighty tasty. Feel free to try them and let me know.

Traps are popular but have the traditional drawback all traps for pests have in that they must first attract the pests. One fellow noted that placing a five gallon bucket under a bag trap resulted in about as many bugs in the bucket as in the bag, suggesting that the bugs aim, when falling into the bag, isn't very good. Anyway it still leaves the problem of what to do with large numbers of possibly not dead yet beetles. I flush mine down the toilet but be advised to do this when the bag trap in no more than 1/4 full. Dumping half a bag of beetles in the toilet looks like a Rhinoceros just had a bad case of diarrhea in your commode.

I'm trying to enlist the local parks and recreation dept in the battle by attaching the pheromone part of the beetle trap to a small buoy to be anchored out in the many small park ponds around here. The theory is that the large numbers of beetles the trap attracts will hit the trap and fall into the pond where the pond critters will find them tasty. Here's a model of such a buoy: It only requires a 1 L bottle with about 3/4 of a pound of ballast to hold it upright. Not shown is a hook on the bottom for the anchor string to keep the thing from blowing around. 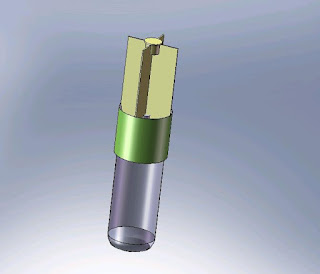 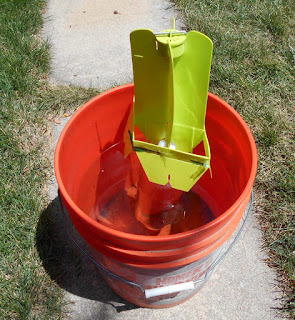 Here's the finished prototype floating in a bucket. If you look closely you can see a couple of beetles already floating in the water. 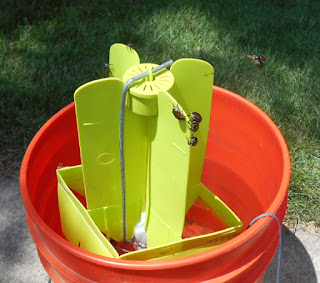 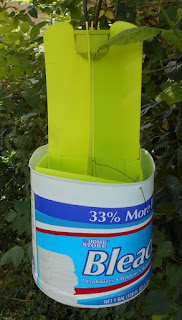 Yes, it draws them in in great quantity. I'm estimating that this rig was getting about 1 bug/minute in my back yard.
The arrangement on the right replaces the bag with a small do-it-yourself bucket containing about 1/2" of soapy water. A couple drops of dish soap as a wetting agent kills the varmints pretty quickly and it's easier to dump than the bag.
Posted by Billll at 3:38 PM