The Unity Party now has over 1000 registered voters registered under its banner so their expected to select their candidates through a nominating convention just like the big guys. Don't get your hopes up. Their platform positions are here, hust click on the line item and get a quick summary of the position.

Warning: The platform reads like it was written by a committee of Gary Johnson and Jill Stein who took turns on the items. The Term limits line was Johnson's, no frills and to the point.

The line about eliminating the income tax sounds great until you see that it was written by Jill Stein.


Eliminate the Federal Income Tax
Unity supports replacing federal income taxes with a revenue measure based on the carbon content of fossil fuels as a simple way of balancing the budget, combating global warming, and encouraging the development of alternative energy sources. A reduction in fossil fuel consumption would enhance American power abroad by making this nation less dependent on foreign sources of oil.

They think they can fund the U.S. Federal Government through gas and fuel taxes alone? They also seem to think they can keep the Social Security zombie alive by changing the way we get taxed to support it now.

This outfit would most correctly be called the PP Party: 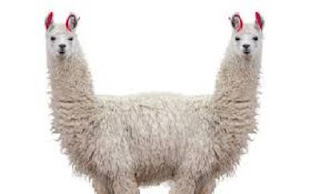 For the Pushme Pullyou mascot. Note that in this configuration it's unlikely to move very fast in any direction. Click the platform link and click on individual items to see the details.