Mexican Pro Wrestling - As Real As It Gets

For some people it is. Here's a fellow whose ring persona is the evilest he could come up with - Donald Trump. The mask is a real work of art.

Trump should bring this guy up to the states, appear in a photo-op with him, then announce that he's the new liaison man between the White House and the Congress. 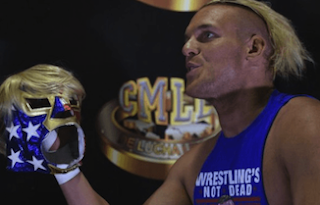