I didn't invent this, but there's a good story behind it. Seems that way back when, the Lockheed Corp. was acquiring a brand new building out in a relatively undeveloped area. When the building was finished, and the employees moved in, it turned out that the building was infested with mice, who had lived well off the construction crew's lunches.

The company announced that poisoned traps would be placed, and the problem would be quickly solved, but this being Southern California, some of the employees objected. The company, being out of ideas, announced a contest to design a humane live trap, and this idea won, being quick and cheap. 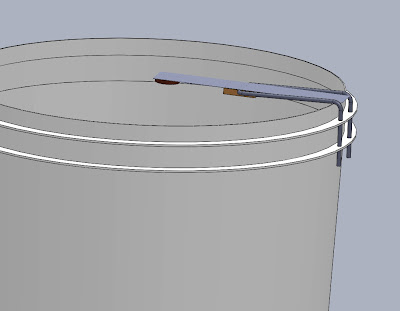 made from a plastic bucket, a bit of coat hanger wire, a strip of aluminum with a hinge made of wood glued to the bottom, it's pretty simple. The brown circle out on the end is a blob of peanut butter stuck to the bottom. The mouse runs out on the plank, overbalences it, and is dumped into the bucket. 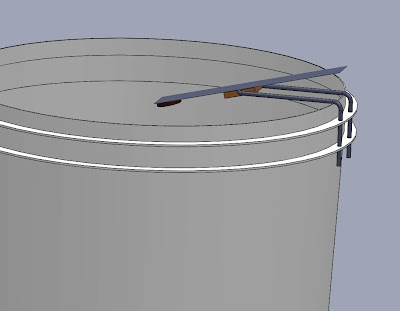 The plank resets itself, and waits for the next mouse.

The traps worked well enough to fill to 2 inches deep over a weekend, and the mice were taken outside, away from the building, and dumped.

From what I heard, they weren't taken far enough away, and promptly came back. At this point, they ceased to be "cute" and were dealt with more harshly. Adding 3 or 4 inches of water to the bucket will prevent the mice from returning.

You have to be sure the mice have a way to get up to the plank in the first place, but they can climb anything rougher than the plastic bucket, so this shouldn't be a problem.

I suppose the variation on this for the mechanically challenged, would be to use a bucket with a lid, and place a plastic funnel in a large hole in the lid, having cut the bottom off the funnel to leave a hole big enough to pass a mouse, say 1-1/2". Make sure the bottom of the funnel is 4-5 inches from the bottom of the bucket to keep them from jumping out.

This works best when you have large quantities of mice to deal with, and is a bit bulky for catching one or two, but it does work, and will catch multiple mice in a single night.
Posted by Billll at 9:09 AM

Thank You! Will make one this weekend!

As shown, this trap doesn't reset for subsequent mice, because the plank rotates into the bucket and there is no way for it to return to the set point.

The solution is to place a stop at the pivot point which prevents the plank from tilting too far when the mouse falls into the bucket.

Hope this is helpful.

The plank is balanced so as to reset itself. Absent a mouse, the default is horizontal.