Two days ago I parted company with my old friend of several years: 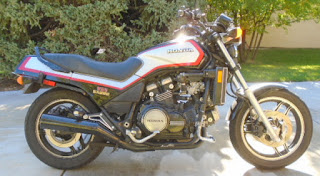 The 84 Honda Sabre 1100 was a real workhorse, blowing the commuting traffic away and generally being as reliable as a refrigerator. Push button = start, twist throttle = go like bat outta hell. 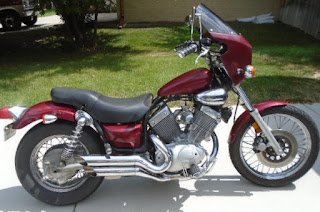 On the commuter trips you didn't notice the weight so much as most of that was on the freeway. For running local errands however, the weight really makes itself known and the horsepower isn't really needed. The Yamaha 535 is 225 lb lighter and several inches lower to the point that I can sit the bike with both feet flat on the ground and my knees bent. At this point I think my biggest complaint is the acoustic resonance from the intake system at certain engine speeds that whistles very annoyingly usually exactly at the posted speed limits or just before I want to shift gears.

I'm going to miss all that horsepower though.
Posted by Billll at 7:42 PM

you have to take the bitter with the sweet. my Kawasaki 900 buzzed like hell in town, because I always ran in a lower gear so I would have the lunge in case some a-hole didn't think that stop light applied to him.