President Trumps suggestion to arm teachers to prevent or at least mitigate the effects of school shooters has been met with widespread disapproval by teacher organizations and other anti gun groups. The most likely reason for this is the collectivist mindset common to such groups. If you suggest arming teachers, they see the program as requiring ALL teachers in a school to be armed. The individualist view is that only teachers willing and able to take on the responsibility would actually be armed, and this would likely be a small fraction of the total faculty.

The collectivist, seeing that only a few teachers might be armed, will pooh-pooh the idea that 1 or 2 armed opponents might stop a dedicated shooter. They visualize an army of some sort standing shoulder to shoulder. Here is a graphic that shows the reported rape rate at CSU in Ft Collins across the '00s. 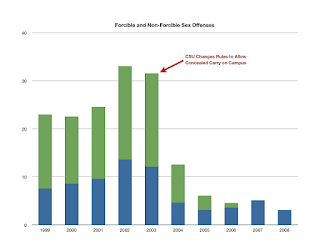 At 2003, the reported rape rate dropped from around 32/year to about 12. That was the year Colorado became a shall issue state, and no one had thought to demand that universities be gun free zones.

Doing the math, one must be 21 years old to get a permit, which pretty much means only Seniors are likely to have one, and only about 5-7% of eligible people actually apply so the odds of a sex offender meeting a carrier are as close to zero as not to matter much. Still, the question is posed. If your chances of getting shot while attempting a rape are about 2%, do you feel lucky, punk? Statistically the answer seems to be NO.

Would arming a few of the faculty stop school shootings? Not completely, but this looks like an easy route to a 66% reduction.

Maybe they should offer a large bonus for any teacher that actually stops a shooter?

That might incentivize some teachers to "deal with" some discipline problems and plant a throw down gun on them. Solve a problem and get paid for it. Gotta be careful this doesn't get out of hand though as it shouldn't take but one or two before the school becomes a model of decorum.