The market declined today by the largest number of points in its history, for a one day move.

Bills Law of Election Year* Rhetoric states that if someone is citing raw numbers to you, the real story or lack of same is in the percentages, and vice versa. Here's a handy chart showing some of the more memorable market drops: 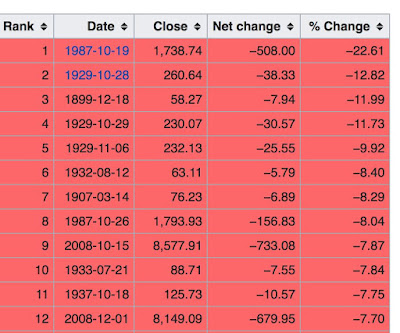 Today the Dow lost 1175 points, the biggest one day drop in history. But wait, that's a drop of 4.6% which is hardly noticeable.  For comparison, look at numbers 2, 4, and 5. Total drop was 90.42 points but add the percentages and you see a 34.47% drop. Now we're talking. OK that isn't entirely fair since each percentage is from the previously reduced total, still...

I had just gotten in to stock investing when the 1987 crash hit. That one rates #1 on the chart and it was sobering to see that much of my money disappear for no real apparent reason. The panic was great enough that the phone line to my broker was jammed and I couldn't get through to join the lemmings jumping off the cliff. Just as well as the market rebounded shortly thereafter. So while in physics, what goes up at less than escape velocity, must come down, In the market it's what goes down for no reason, eventually comes back up again. This applies generally to the market as a whole. The exception to this is individual stocks which can certainly go down and vanish in a cloud of paper.

The bright side of this is that most stocks are now on sale at 4.5-5% off. Hmmmm. 5% off. Would you go to a store selling anything for a 5% off sale? OTOH if you call your broker and buy one of the market index funds, there's a good chance you'll pick up 5% over the next 6 months or so which is way better than you'll do on a CD from your bank.

*Pretty much every year seems to be an election year or a run up to one any more.
Posted by Billll at 6:35 PM