Scott Adams has addressed the issue that pops up every time there's a high body count shooting, that the left instantly pulls out copies of the gun laws they failed to get passed the last time, and accuses the right of being complicit for not passing them. After a week of blood dancing, they grudgingly admit that none of their proposals would not have materially affected the outcome, and we all hunker down and hope it doesn't happen again. Which it will.

A few years back it was proposed that concealed carry be banned on all state educational campuses. But wait, there's this: 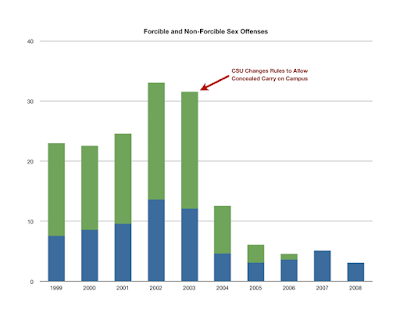 A fairly substantial drop, eh? Consider that in Colo, you have to be 21 to get a permit, which means that pretty much only Seniors will have one. At the same time only about 7% of eligible people actually go to the trouble of getting one. So on campus, only 25% of the students are eligible to get a permit, and only some 7% of those actually might. Meaning that less than 2 of every 100 seniors might be carrying. Consider as well that on average, men are more likely that women to do this so a campus rapist is looking at a risk factor of somewhere around 1% that his intended victim will be able to defend herself. Now look at the answer to the question "Do you feel lucky, punk?" and note that the answer seems to be "No!"

It has been suggested that some effort be expended to encourage educators to get training to allow them to conceal and carry. Most educators tend to be Democrats or some other form of lefty which implies that most of them are at best severely hoplophobic. At worst it should be noted that most mass shooters are themselves some sort of lefties, but that's the pool we have to work from.

Additionally, consider the case of banks, where the contents must be carefully guarded, or businesses where admission to the facilities must be carefully controlled. The businesses use RFID cards currently, although soon facial recognition may replace them. The banks train their employees to recognize threats and give all of them a button to push should such a threat materialize.

These steps would make an assault on a school much more difficult and risky for someone looking to run up a new high score. Would it eliminate the problem? Not completely, but it would certainly help.
Posted by Billll at 9:48 PM