Here's the comparative data for the last 5-1/2 years for NICS checks. 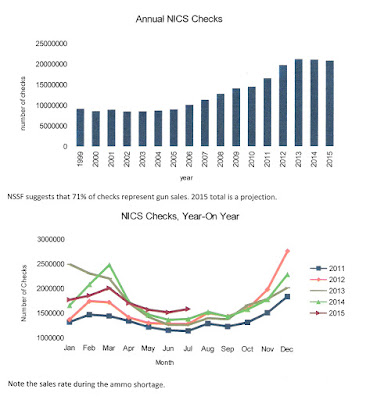 The 2015 curve looks to be following the same profile the previous years have shown but at the rate it's going it's projecting slightly lower overall sales for the year. This is probably because of early peaks in 2014 and 2013. If the bump over the average holds, the final number should be noticably higher.

Year on year, NICS check numbers keep going up at a slightly increasing rate. As it becomes more readily apparent that the administration doesn't have a real problem with violence, more and more people will be willing to fill the gap. Sad, but true.
Posted by Billll at 7:56 PM