The local news in Detroit is reporting that a local mother met an attempted home invasion with gunfire, thwarting the effort.

When the thugs were driven off with the first shots, one of them retrieved a dropped pistol and attempted to return:


No matter. His tenacity was rewarded with a second shotgun blast, and he took off again into the night. None of the suspects were hit by any gunfire.

Here's the "shotgun" in question: 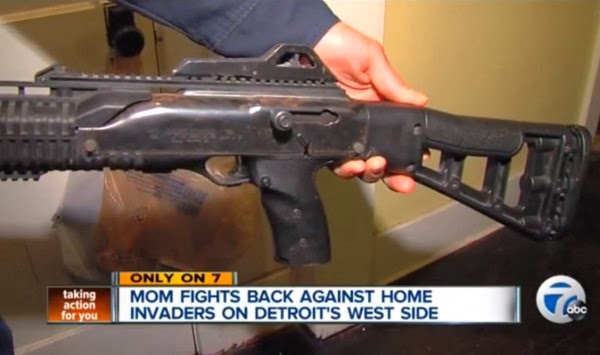 I have a similar one. Less rust though. I had no idea that shot shells were available for it. Maybe she had it loaded with those "snake shot" loads. I'd wonder about their ability to cycle the action though. I guess we learn something new from journalists every day.

News Hack is a better name than they deserve. "Journalist" has become a very bad joke.

The little carbine sure does need some love.

It MUST be a shotgun. Because everyone knows that evil "assault weapons" with pistol grips and rails on top are no good for self defense. They are nothing more than kill-murder machines for spray firing from the hip.

Self defense with a long gun = shotgun. Period.

Using various home security products are the best way to protect your family from home invasion and desperate criminals and also protect your valuables from thieves when you are away.