He now says that he'll cut the deficit by half. Want to know how he plans to do it? Easy: 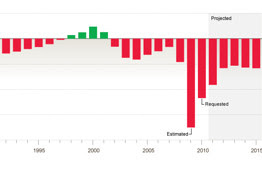 He runs up such a deficit in his first couple of months that anything he does thereafter looks good by comparison.

The WSJ has an extensive article on this today.

Yeah, I remember all the whining the Dems did about Bushes deficits too.
Posted by Billll at 8:56 PM