Bring Back The Asylums?

Mass murders seem to have all too often, the common feature of a killer with multiple screws loose or missing. After a while one begins to wonder if there are more of these running around loose, and why now? Clayton Cramer is working on a study (maybe another book?) on this topic and is collecting data on all the mass killings he can find records of back to the 1600s So far the results look like this: 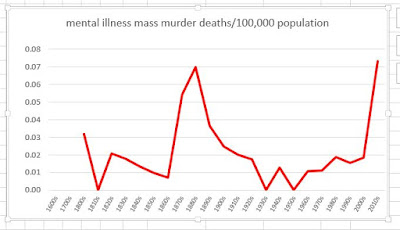 This graph doesn't go all the way back, but it's what he has the data for now. The two spikes are interesting to say the least. Have we been seeing more than out fair share of mass killings lately? Seems we have. When did this get started? seems in the 80s. What happened in the 80s? Global Warming? Ronald Reagan? Oh yes, how about deinstitutionalization? If you clear out and close down the state mental hospitals, where do the former inmates go? Why out on the streets. Most of the latest batch of killers are too young to have had anything to do with this turn of events, but they might well have been involuntarily incarcerated had the old programs not been cancelled.

Now think about the First steps program whose purpose is to empty out the state prisons. Well intentioned, but I'm suspecting this will end about as well as its predecessor. As a by-product I suppose we can expect the sudden uptick in violent crime to lead to further calls for gun control.

Never let a crisis go to waste, even if you have to create it yourself, eh?
Posted by Billll at 2:46 PM