The bicycle pulled camping trailer project continues with the arrival of the motor for the bicycle. The opening bars were played 3 or 4 posts down.

The gasoline booster motor kit came yesterday and got opened this afternoon. 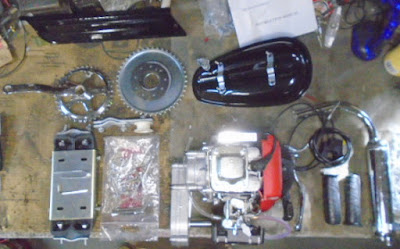 What fun! 2 smaller boxes inside the larger one, one containing the motor and motor care and operation instructions, and the other containing most of everything else. Notably missing were any assembly instructions at all. This thing takes after the Dacia automobile company whose attitude was that people of insufficient mechanical aptitude shouldn't be privileged to own one.

I've figured out what most of the stuff is for and where it will eventually wind up living. There are a couple of parts whose function I don't see but will surely find a happy home somewhere if possibly not on the bicycle. Also included is a large bag of screws, nuts, and washers, many of which will no doubt prove useful in the assembly process. This is the sort of challenge an engineer can appreciate as most of us tend to ignore any included instructions anyway. We figure that if you know the intended function of the device, the form of the individual pieces should be a dead giveaway to their ultimate location and attachment. We also understand that most manufacturers include some spare parts for the entertainment of the more creative types in hopes that eventually one of us will complete the assembly of the first working quantum cosmic infindibulum and a part with the donor company's logo will appear in a prominent location.

It could happen.
Posted by Billll at 4:28 PM