This year we elect the lesser known candidates, those running for City Councils and such, usually as non partisan races which means that they all say they're fighting for you while steadfastly toeing the party line. This sort of false flag candidacy should be illegal. The Socialists should be required to publicly admit it.

Next year the governors race is open as the current Marxist is term limited out and is currently campaigning for a position as trade minister in India. Already it's getting close to easier to list the names of those NOT in the running for Governor, but here's an article from the Denver Post describing 9 wannabe governors by their positions on guns. In general, there are no real surprises here with the Dems coming down firmly on the side of the criminal class and the R's more generally supporting the citizens right to self defense of their lives, liberty, and property.

Tucked into the article is a handy chart breaking down 6 of the candidates by position on different issues: 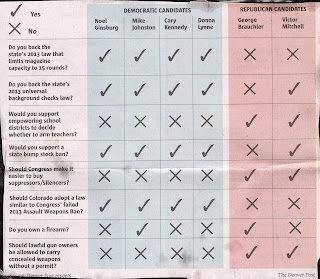 At this point, it's a no-brainer, with Mr Brauchler walking away with my vote. There are, of course, other issues, and I'm eagerly anticipating candidate positions on fixing the roads vs throwing more money down the light rail rat hole, and possibly declaring the Peoples Republic of Boulder County to be an autonomous area, tearing up the roads into it and building a "great" wall around it until they come to their senses.