Noticed the car was quieter than normal today if somewhat slower. Got home and noticed some stuff stuck into my tailpipes. Wondered if it was the neighbors fed up with the noise the car was making or maybe my yard signs and pulled the stuff out: 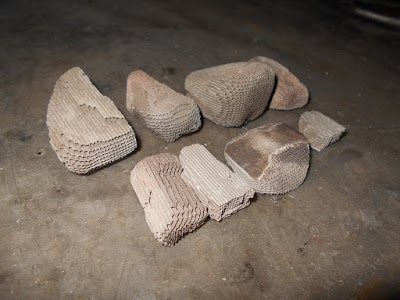 These little numbers are not hornets nests, but broken fragments of my cat converter which had worked their way down the exhaust and through the muffler. I suppose they would have eventually gotten blown out the tailpipes but these got caught in the baffles. This probably accounts for some of the rattling I hear when I go over bumps. The car is now significantly noisier.

The chunks I'm told are platinum.

The car is what GM calls the "base" model, which means it has the smallest engine and no options. I've discovered that it does come with at least most of a complete wiring harness so a couple trips to the junkyard and now I've got cruise control and push-button trunk opening. I tried for power door locks and got the right parts but the harness is not all that complete so I'm holding that project for later. Gives me something to do in my spare time.
Posted by Billll at 12:43 PM

A few years ago there was a lot of hoopla about cat converters being cut with a sawsall & stolen from mall parking lots. I'd at least inquire of a junkyard to see if there is actually platinum involved before scrapping those chunks.

They were being stolen because they run in the neighborhood of $400/ea to replace. The yards have signs in English and Spanish noting that they DO NOT sell converters. I don't think those pieces have any value, it was just odd to see my tailpipes plugged with large chunks of debris.

The modern three way catalytic converter has three precious metals plated over a ceramic honeycomb. The three metals are platinum at $1,000/oz, palladium at $630/oz and rhodium at $770/oz. Those are troy ounces which a bit heavier than avoirdupois ounces. Due to the cost of these metals the plating is very thin, probably 1/100,000th of an inch over a pure aluminium base layer.

I'm not sure how they reclaim the platinum, rhodium and palladium but I suspect it would be to heat the honeycomb until the metals melt and then separate them by density. Platinum melts at 3,000F so it is not a simple undertaking.