March stats are up and we have another all time record! 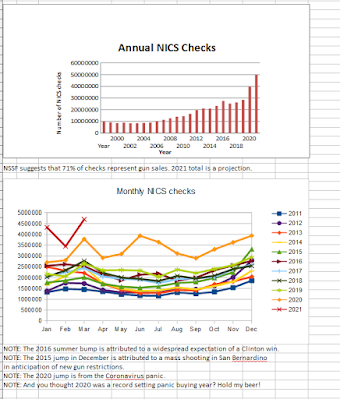 You gotta hand it to the Democrats, they know how to sell guns like no one else. Defund the cops? Sure! Empty the prisons? Absolutely! Tolerate rioters to the point of favoring them over the citizenry? You know it! On the up side, no matter how many 30 round mags a mass shooter has, he probably doesn't have more than 20 rounds to put into them as that's about all the gun store will be able to sell him with the gun. Puts a premium on marksmanship and keeps the body count down.

The March count was 4,691,738 so if you take the received knowledge that about 70% of those checks went for gun purchases, that means a bit over 3.2M new guns in circulation. Throw in a box of 50 rounds per gun and someone needs to be making 164.2Million rounds of new ammo. Mama mia! Datsa lotta ammo! And that's just for the new guns. The existing 400M need to be fed too.