The Future Of Transportation - Elio Re-Invented

I'm completely unsurprised to see this, a variation on the Elio 3-wheeler only electrified. Adding the electric package is a coming thing among the amateur car builders. In this case the manufacturer has taken the Elio concept of a fully enclosed 3-wheeler with 2-in-front configuration and tandem seating, and electrified it. 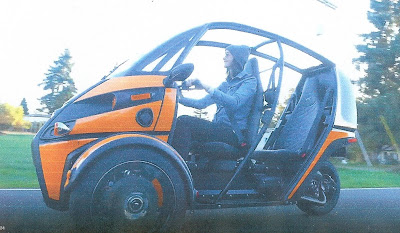 The big differences are that 1. this one is the very trendy electric, and 2. It's actually in production. Priced at $17K it's not nearly as cheap as the Elio promised, but is probably more realistically priced considering the not inconsequential inflation that has taken place since Elio rolled out its first prototype.

Leaving off the side doors probably keeps the price down and makes sense in a tropical environment like Eugine OR. I could see some gullwing doors in this vehicles future which would make it a real, all weather vehicle. The top on this one is plexiglass and a half side cover is available on the delivery version.

They promise a top speed of 75 and a range of (up to) 120 miles in town. I wonder what a used one costs, and how hard would it be to convert to a gasoline engine, either small car or motorcycle? Top speed then would be 110 and range essentially unlimited.

UPDATE: A little digging reveals that enclosure is an option. It's a gullwing, and is seemingly available on one side only. Or I could be wrong, both sides could be opening, just not at the same time. 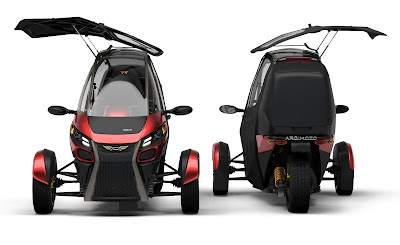