The Future Of Transportation - China

With a few caveats, of course. Here's a couple of offerings from our friends, the Chinese. The first is a GM China product, the Wuling Zhengtu pickup. 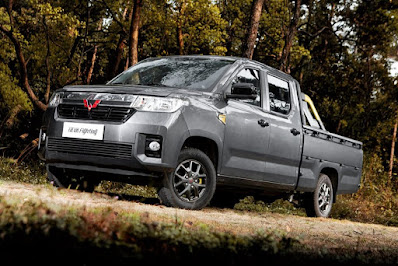 Looks like a real pickup although it's much smaller, and features a 1.5l gas engine and a top speed of 75 mph. Look closely and you'll see hinges along the bed. Yes, the sides fold down to make a flatbed. This is a GM design made by Wu Ling and lists for $9000 in China. Shipping for something like this runs about $2500, but drops quickly if you order more than one. I suppose it depends on how many can be stuffed into a shipping container. It's 16 ft long with a 6-1/2' bed so not too small. No word as to whether it meets any U.S. standards for import yet.

Next up is the GenX camper from China by Everbright: 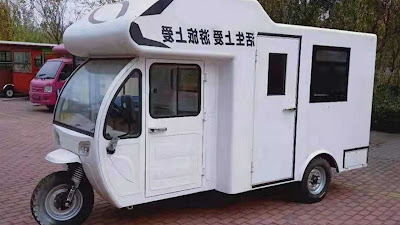 The traditional pickup over-cab camper meets the lambretta 3-wheel ice cream truck. Having only 3 wheels makes it a motorcycle, which skirts most U.S. vehicle safety laws and probably makes it legal to import. The big drawback is that its top speed is limited to 25 mph. Of course that also means that it's a low speed vehicle which in some places exempts it from licensing requirements. $4800 plus shipping (see above). They claim a 240 mile range which would be 10 hours at 25mph which I personally tend to disbelieve. Might be a job opportunity here though selling ice cream in the neighborhoods.