Sort of. 9 years ago I got one of the  first Hi Point 4095 carbines to hit the market. I've been shooting the dickens out of it since to the point of using it exclusively for IDPA competitions to the tune of around 1000 rounds a year. December of last year it had a failure that the factory opined was probably terminal so I sent it back via Triple J Armory in Littleton.


Had rather a crush Tuesday with the new gun arriving around noon and the club having a scheduled match that evening. The shop had to log it into their inventory, me arriving at 2:30, and the BC and all taking to 3:30. I showed up with the red dot and the rest of the match gear and left the shop directly for the match with the parts in bags and boxes.


Arrive at ARPC at 4:15, assemble the gun with the sight, set up a target and get the sight more or less dialed in. It adjusts with an allen wrench and all I had was one that was pretty close to the right size. Hard to feel the clicks. I decided the lower group was close enough. 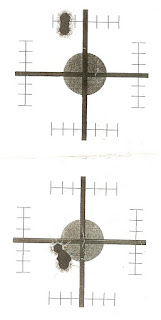 Helped with the stage setup and shot the thing. The gun worked great. Had one failure to feed from the brand new (really ought to take them apart and clean them before use) magazine, and one brain fart loading the wrong mag for the stage and coming up 1 round short (5 down). Finished the match in 4th overall but the fellow who finished 3rd was some 20 points ahead of me so the -5 didn't hurt my standing any.

From the look of those groups, the new gun is noticeably tighter than the old one so any complaints I had about looseness before can now be safely disregarded.

I love my .45 Hi Point, and it is usually in the truck when I go over to check on the farm. I need to order some new hats and T-shirts from their website.