One can hope. My customer tried the bike and trailer out and pronounced it to be about 98% done. Seems the offset pedal cranks don't quite get her legs far enough off the motor. We found some extensions for the pedals at the local bike shop that moved them about 3/4" (20mm) further out but after trying them out we decided to get some just a bit over an inch (27mm) long.

One advantage to the extensions is that a 50mm extension on the right hand side would allow the use of the stock pedal crank and chain ring set which would be MUCH easier than trying to adapt something to the crank that came supplied with the kit.

Don't know where those sizes came from, but that's the sizes they come in. Of note is that the longer ones were out of stock while the short ones were available. This should be a clue as to which ones actually work. 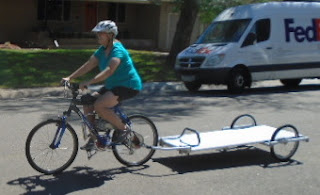 Cruizin' along. We're thinking that it might be easiest to simply throw a pup tent over the trailer when it's parked than to add the structure to support a fixed cover.

Test snooze. GSXR the dog is checking to see if there's room for her as well.
Posted by Billll at 7:45 PM

Does she consider it 100% - after the pedal installation?
Might consider a bivy tent, kind of a cross between a sleeping bag and a tent - no installation issues at all!