As of October, gun sales seem to be in a bit of a doldrum, at least compared to last year when President Hillary was looking inevitable: 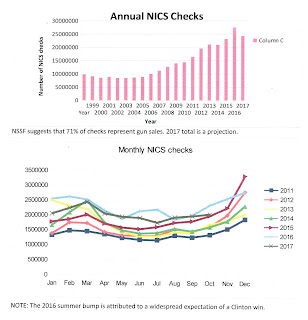 One might almost think that Hill has usurped O'Bummer's crown as gun salesman of the century although her influence only lasted one year and cannot, of course, be compared to his 2-term cumulative numbers.

November-December is usually busy at the gun show and I'll be there tomorrow so I guess I'll see. I had been noticing the place being rather under attended for some time though.
Posted by Billll at 6:19 PM