Is The Left Desperate? Yes!

Here's the latest move to insure that the left doesn't lose its trifecta of political control: charge Republicans under section 3 of the 14th amendment which disfranchised southern politicians after the civil war. 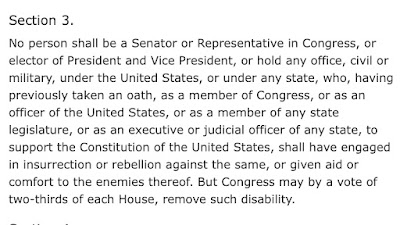 Hard to believe, but there it is. Frankly I don't think they'll get very far with this, but if you find a friendly judge to uphold this moonbattery, it could take years for it to get to the supreme court and get tossed, and in the meantime, the Dem candidate gets to claim that his Republican opponent has been plausibly charged with insurrection.