Gun Sales - Through the Roof!

It would seem that  the powers that be behind BLM and Antifa can sell guns even better than Hillary or Obama. June checks are nearly 4 million and the projection model* is looking at nearly 40 million checks this year. Yes, I know not all checks represent a gun sale, but even using the NSSF estimate, that's nearly 27 million gun sales for 2020. 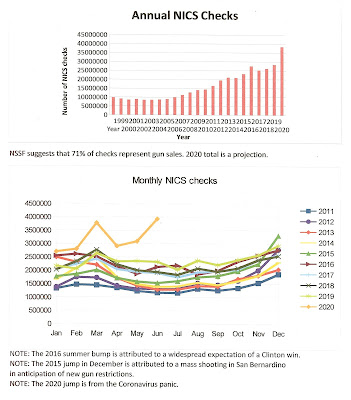 O.K. then, the 2020 curve is well off the reservation. The Murder Hornets, which seem to have disappeared from the news, don't have a chance. When your revolutionary army is met by liberal lawyers wielding AR-pattern rifles, you could reasonably conclude that you're on the wrong side of history.

Data like this can also be presumed to show a rather drastic decline in popular support for government. At this point, the lack of faith is in local level governments. Mayors and Governors. People are beginning to ask who is funding all this turmoil. Looks like outsiders.

*Yes, I know that projection models are in rather bad odor currently, but you got to use something if only to point a general direction.
Posted by Billll at 8:07 PM

They are going to have a Gun Show in Richmond VA the weekend of 11 July. This will be the First since our dear Gov shut the state down for this COVID nonsense. I'm will to bet that it will be a sold out shortly after opening.

The down side is that Covid cases might take another jump about 2 weeks after the gun shows return similar to the jump following the BLM riots. Gosh! I wonder if the press will make a connection this time?