Found this while attacking the stump in my back yard. 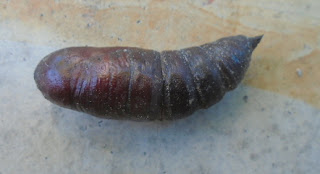 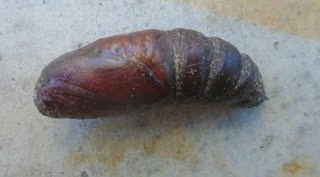 It's a pupae of a moth, and it's 1-1/2" long by 1/2" in diameter. Way back when, we kids would find these and our parents solemnly explained that we had found a which-a-way bug. When held with the pointy end up and squeezed gently, the pointy end would wiggle in a circular fashion. If you asked the bug "Which a way did (insert someones name here) go?" the angle of the tail, when you backed off the squeezing, would reliably indicate the direction in which the person would be found.

It seldom took more than one try to disprove this, but if you put the thing in a jar with a thin layer of dirt and a mesh cover, you would eventually see the moth emerge. By now I've forgotten what kind of moth it was but I seem to remember that it was one of the larger ones.

This one was dead when I found it.
Posted by Billll at 8:34 AM