Held once again in the thin air at the Arapahoe county fairgrounds.

My friend Mike brought his air cannon, Kamakazi  whose best launch was his second of the day on Sunday - 3,970 ft.

He was in the lead until the last two launches of the event. Sonic Gourd came out of the woodwork w/ a distance of 4,209 ft., but was immediately edged out by Big 10 Inch at 4,276 ft., leaving him w/ the 3rd Place trophy.

The JCOS school where I help out was using a rolling arm trebuchet which was pretty much completely new this year due to last years treb being pretty much self destructed on their last shot last year. The old familiar scene of the team assembling the machine for the first time on the firing line played out about like you'd expect with a couple of pieces missing and frantic efforts to fabricate them. 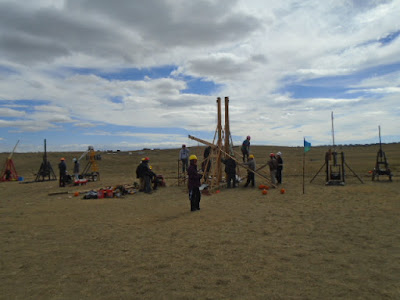 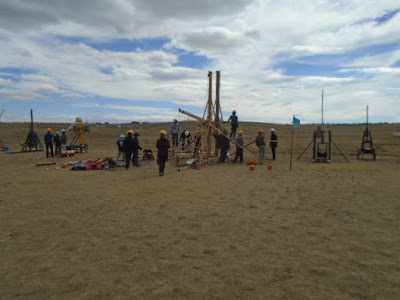 They got the machine assembled midway through Saturday, and tested it with minimum (180 lb) weights. The arm was supposed to fit between the deck plates about 6 ft off the ground, but the spacing of the deck plates and the width of the verge turned out to be exactly the same at 4 inches which left no room for wobble. Since there is always some wobble, the arm stuck halfway down and slightly damaged the 2 rear deck plates. By Sunday the oversights had been corrected and a first test shot got them 273 feet. This group holds the division record at 498 ft so optimism ran high. By the time they were ready for their second shot, time was running out so it would be the last. They loaded ALL the available weights ( about 1100 lb) onto the machine and let fly for a shot of 407 ft. This might have been enough to win it but the plate attaching the weight bar to the verge tore out of the verge and the verge traveled about 20 ft down range with the pumpkin. Alas this disqualified the shot. The 273 ft shot got them 3rd place. This week I'll be giving a lecture on splice plates, bolt spacing, and fastener count which should hold everything together next year.

The plan for next year is to reassemble the machine about a month before the event and sort out all the weak spots before setting up at the event. EX: dropping 1200 lb requires more than 3 bolts out near the end of the verge to keep the parts together. The bracket was whipped together the day before the event and absolutely NOTHING was actually tested in advance.

Exception: I tested the Microlaminate verge before cutting the taper in it using the E value supplied by the manufacturer (2,000,000). Then I calculated the actual E value based on the deflections I got (1,000,000), then calculated the actual allowable taper we could use. Then added half an inch. That part worked. 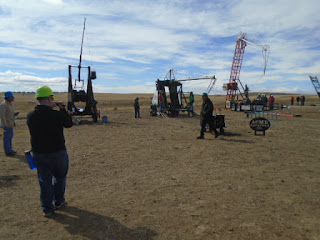 L to R: The SCA brought 4 trebs and assured us that the old ways were best, Acme Catapults used about 20 garage door springs and made some impressive throws, over 2000 ft as I recall, and Pluto, essentially 2 trebs on one arm and about 3000 lb of concrete, turned in its usual impressive performance. Alas I don't have numbers for them. 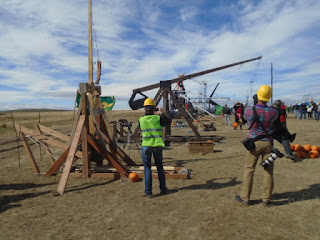 The centrifugal machine on the far end had some teething problems and was not run. Too bad, they had an aircraft turbine to power it up. So there's my days at the range. How was yours?
Posted by Billll at 4:27 PM

I tried to figure what a "verge" is. Arm? Well, the web didn't help me out any. But the pages containing "trebuchet" and "verge" were in French, so I figured I'd look up the translation of verge in French.

So ... bringing a trebuchet to war is a dick move?

You're right, the verge is the arm of any catapult. Also the origin of the expression "to be on the verge" or about to be launched.

Dick move? The French have a peculiar sense of humor.