Overall gun sales thru October came in pretty flat with no mass shootings or big political setbacks in the news. I suppose a lot of people are waiting to see how the Kavanaugh nomination fares, and to a lesser extent, the mid-terms.

As of right now, Judge K seems like a pretty secure bet. 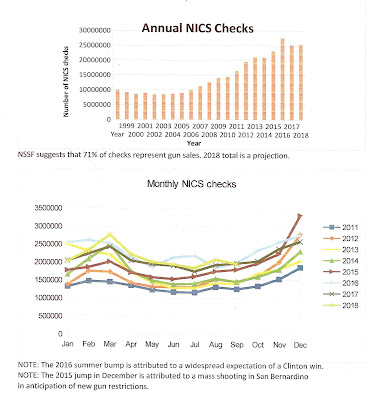 Speculation abounds as to what might happen if the GOP loses the House with the latest being Impeachment proceedings beginning Jan 22 next year against the Judge and with that presumed success, a move on the President.

Winning the House would make the attempt possible, but you need super majorities in both houses to make anything stick and it may already be dawning on even the party faithful that the reputation of the Dems is currently on a par with some of the more violent inmates of selected state institutions. OTOH as has been observed, no one ever went broke underestimating the tastes or intelligence of the American public.
Posted by Billll at 4:33 PM