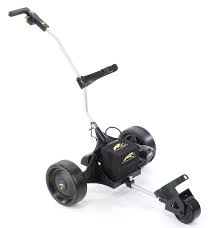 Came with battery and charger. The handle and front wheel extension are easily removable. Adding a small bicycle to this isn't very hard and can be done on either end of the bike. Putting the caddy on the bike as a replacement for the rear wheel makes a conventional trike, the disadvantage is that it's a rigid frame and a bit top-heavy. One could also use the caddy as the front wheels if a steering head is mounted under the bottom bracket which would allow the bike frame to lean when steering the machine. The disadvantage here is the relative complexity of the thing. I went with the easy route

Added support plates and an axle to hang the small bike on and voila! 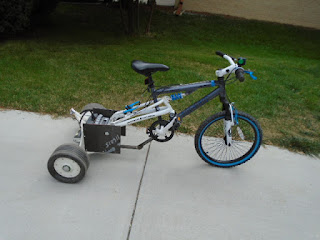 The bar on the bottom is to keep the assembly from folding itself up. 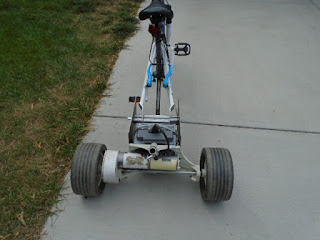 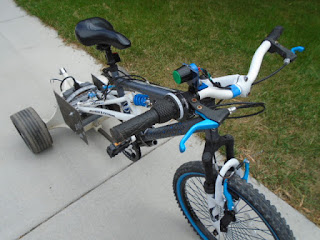 Speed control moved to the handlebars and off we go. Only problem so far is the rather modest (abt 6 mph) top speed since the caddy was intended for use by a walking golfer. The gearbox is a proper marvel with 2 stages of quiet running helical-cut gears. 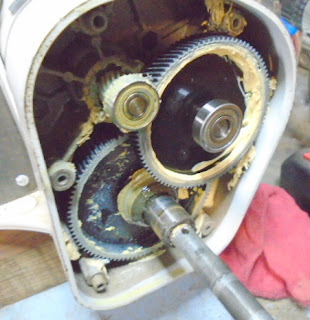 Changing the speed would entail finding 4 new gears (expensive) or replacing the gears with sprockets and chains, which seems a lot easier and less expensive. Additionally there's the possibility of replacing the heavy 12V lead-acid battery with some 18V lithium units from a cordless drill or something. This cart is an old one and the company has upgraded to Li batteries. The new battery pack is expen$ive.

At this point I haven't much into it and could probably sell it as a kid's toy. Alternatively I could just sell the bike and continue with the original plan for a fighting robot. We'll see.