In the spirit of numerous You Tube videos, here's my Will It Run project.

I had about decided that my 84 Honda V65 Sabre was getting to be larger and heavier than I wanted to horse around any more. Driving to work on the freeway was a treat, but I don't do that now, just run back and forth to the hardware store. So here's this 87 Yamaha Virago 535 at the bargain basement price of $400. Looks to be nearly all there, and allegedly ran last year but currently having some electrical problems. Complete with a clean title. Just what I wanted, having been a motorcycle mechanic in the distant past, this should be a relatively easy fix. 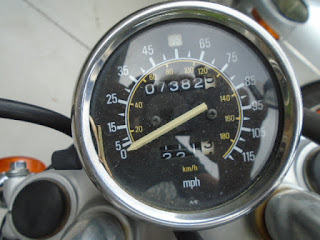 Not bad for a 32 year old bike, no? The "clean" title turned out to be in the name of the original owner when the bike had but 2 miles on it and the finance company had released its lien, so it was clean. The owner had even gone so far as to sign off as the seller and whomever got the thing had never bothered to transfer the title. Fortunately they had also not bothered to sign anywhere either so I'm the second owner. The title formats have been changed several times since this one was issued, and the wife was convinced I'd be lucky to get out of the DMV without handcuffs, but it went through although it did take more than average amount of consultations with higher ups. 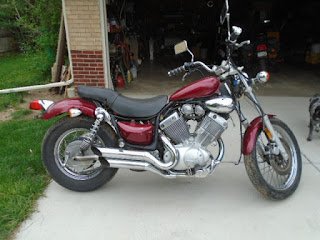 Spiffy aftermarket seat and handlebar grips and a headlamp dangling from the wires. Should be no big deal to get up and running, right? Closer inspection, after I got it home, revealed that the fuel pump was a NAPA aftermarket unit attached to the stock wiring harness but not turning on. Also the original ignition switch had been turned with a screwdriver, the key having long since gone missing, and cut out of the harness leaving 3 short wires peeking out at me. It also had 2 cables hanging out with large connectors on them and no obvious connection points.

So far I've found out that the handlebar switches are from a larger/later model Virago and while the cables plug neatly into the rest of the harness, the pin assignments do NOT match anything which is why the ignition module begins humming when you signal a left turn. Also the wiring on this is unique to 87 and 88 only in this displacement so finding a workable set of switches could be difficult.

The gas tank, which looks stylishly small, turns out to be only a cosmetic shell. Notice no gas cap. The actual tank is under the seat. The cap is missing, and the neck looks like it was resized a bit with a hammer.

Shorting a wire to the starter spins the engine over smartly so that's good although there's no spark or fuel pump running. Wires for that are routed through the handlebar switches which pretty much don't work yet.

Found a left hand switch set at Sunshine Motorcycle Parts and it's on the way. Still need the right hand set. Spares that came with the machine included an ignition switch with key and the wrong connector, the handlebar switches from the wrong model Virago, and grips that fit way too loosely.

More as it develops.
Posted by Billll at 3:01 PM