Gun Sales - No Surprises So Far

Despite the anticipated takeover of the House by the Dems, there seems to be a strong undercurrent of belief that even if they do, the Senate will remain safely Red, and the president would veto anything overly egregious. 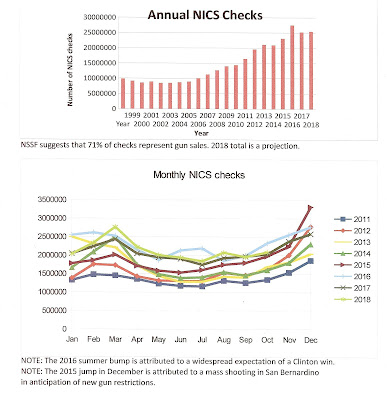 At this point I would predict the 2018 curve to follow the historical path and end the year in a 3-way tie with the December marks of 2012 and 2016, or possibly slightly below them.

If the Donks take the house, we can expect 2 more years without a Hearing Protection Act or National CCW Reciprocity. OTOH, with a deadlocked congress, we won't see much of anything else, like a budget.
Posted by Billll at 8:07 PM