One of my friends found this and passed it along. If you think about it, the problem with the Segway was that it takes up a lot of space, and mixed into a pedestrian environment, can make the rider rather intimidating.
This 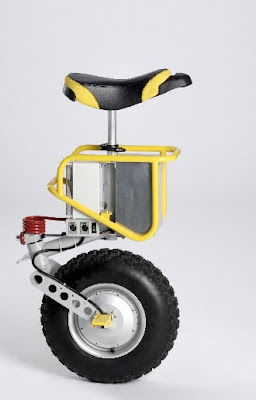 solves that problem by producing the most compact Segway imaginable. The builder is currently trying to get production off the ground, and doing the multi-country patent dance at the same time. This thing has a range of 30 km and a top speed of 15 km/hr. The first question I had when I saw a Segway was "What happens when the battery goes dead enough to be unable to balance that thing?" The same question comes to mind here, but the potential exists to fall in any direction at all.

Still, this thing appeals to me, which should tell you something about a really sick and twisted mind.

H/T: John. The link goes to a nice movie of the prototype being trundled about. It weighs 28 kg, so slinging it into a car trunk may not be everybody's idea of fun, but it's small enough it could probably be convinced to trundle up a small ramp into the passenger seat where it can be connected to the power outlet (does anyone light cigarettes with that any more?).
Posted by Billll at 7:43 PM